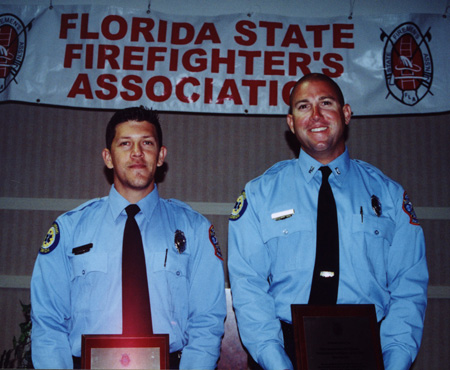 Firefighter/Paramedics Ken Gurdak and Robert Soto were returning from a certification test at the State Fire College in Ocala about 2:30 p.m. on March 13, 2001, when they saw a frantic crowd gathered on the northbound side of the road seven miles north of Fort Pierce. Figuring there must have been a serious accident, they drove across the median to see if they could help.

They were told a pickup truck had rolled over three times and plunged into the canal. FF/Ps Gurdak and Soto tore through thick brush where a passerby was in chest-deep water trying to get Into the truck. The firefighters used a center punch to break the window, but the submerged vehicle was so embedded in the overgrowth in the canal that the men could not get in.

FF/P Gurdak then backed his pickup truck into position, while FF/P Soto attached a tow strap to the overturned vehicle. Within moments the vehicle was flipped over. FF/P Soto and -the passerby found the victim, who had been under water for about 10 minutes, and FF/P Soto began resuscitation efforts. St. Lucie County paramedics arrived and were able to establish a weak pulse, but FF/P Soto and Gurdak were saddened to later learn the victim died at the hospital. Battalion Chief Gary Key of the St. Lucie County Fire District took the time to personally acknowledge both FF/Ps’ actions and professionalism by a letter to the Fort Lauderdale Fire Department. 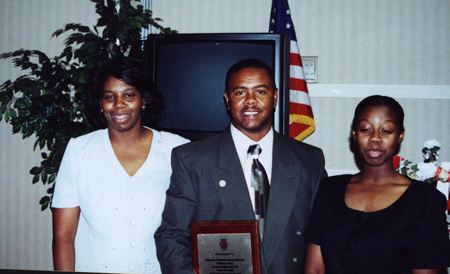 Herbert has been with the Division for 19 years, with the Tallahassee District stationed in Wakulla County. First being hired as a Forest Ranger and then promoted to Senior Forest Ranger.

Not only is Herbert a real asset to the Division as a firefighter but he is also a highly regarded person to his community. He is very knowledgeable in his field.

Herbert is a member of the Gold Team, who responds to emergencies not only in Florida but also wherever his team is needed. Herbert has never failed to respond to help the people of Florida and across the nation whenever called upon. 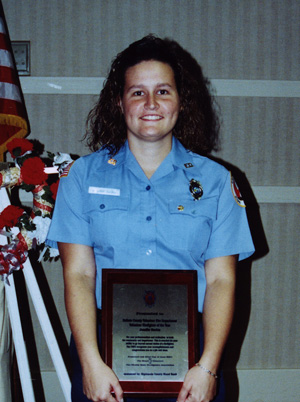 Jennifer joined the Desoto City Fire Department in 1998. Since then she has worked her way from firefighter up to engineer. Jennifer is always willing to learn more when it comes to firefighting. When the opportunity came along for the 160 hour class, the members of the department were exempt from training and meetings, but she always found time to show up for them and also keep up her percentage of fire calls. There were many nights where she could be found dragging hose across the fire station.

She is always willing to help others, even when they are kittens found under a fully involved mobile home fire. She gave them oxygen to keep them alive. Jennifer has worked hard to become the firefighter she is today.