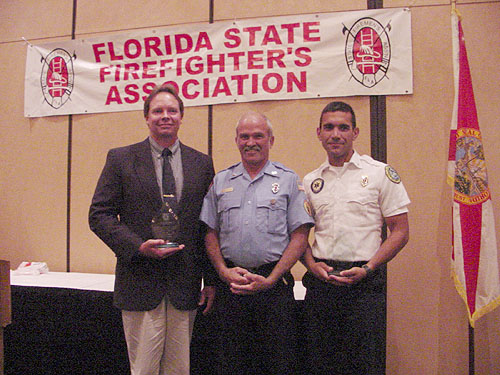 He was nominated for his outstanding efforts in a recent rescue, involving a boat accident. On August 17, 2002, Henry was on duty when two boats collided, on the bayside of Islamorada. The collision forced the boats into very shallow water. The Coast Guard vessels and Fish and Wildlife vessels could not reach the patients. EMS BC Farfan called for help from the Monroe County Sheriff’s Office TraumaStar helicopter. He is a highly-trained rope rescue expert and an experienced boater. He was familiar with the area and knew the only way to get the patients out would be to perform a vertical extrication using a hoist and stokes basket. “Henry was on auto-pilot,” said Chief Wagner, “He knew exactly what needed to be done and how to do it.”

Joe Burroughs is a Senior Forest Ranger and serves as the Orlando District and region 3 wildfire prevention coordinator.

Joe has developed a spreadsheet and a two year data base which includes fire cause, date, time location by GPS and responding crews. Using ARCVIEW and GPS technology, Joe is able to chart the fires on county maps and map in detail specific fire areas. This technology allows one to quickly identify trends with respect to time, location, proximity to schools or other unique characteristics. Fire prevention strategies are then developed with pinpoint specific issues for individual problem areas.

Joe is also the prevention chairman for the Orlando District, where he developed classes, in fire prevention, for the middle schools.

On June 11, 2003, Jesse L. Gaskins, a volunteer firefighter, with Sun N Lake Fire Department, was eating lunch along the Peace River, when he heard shouts for help coming from the rain swollen river. The screams were coming from 23 year old Gayla Ferris and her 3 year old daughter Kaci, who were being swept downstream after a canoe they were passengers in, capsized.

Jesse does everything from his heart, thinking only of his daughter, he jumped into the river, reached Gayla and Kaci and stayed with them holding onto branches for about 45 minutes, until a boat from Florida Fish and Wildlife arrived on the scene, to assist with the rescue.