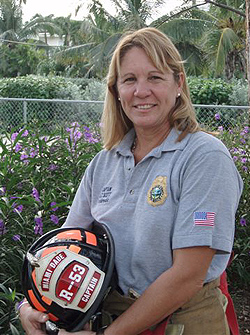 Captain Scott performed a selfless act that resulted in a lifesaving incident. She responded without hesitation, even though she had no personal protective gear and suffered second-degree burns on her hands and face. For such bravery and dedication, Miami-Dade Fire Rescue presented Captain Scott with the Gold Medal of Valor, our department’s highest honor. This medal is given to an individual who has performed an act of bravery, gallantry, or courage in the furtherance of saving lives and/or protecting property in the presence of great personal danger, which is above and beyond the ordinary call of duty. Our department also presented her with its lifesaving Award and Purple Heart.

In addition, Captain Scott has received a Firehouse Magazine Heroism Award; and locally the Kendall Federation of Homeowners Association recognized her with that organization’s Firefighter of the Year award. Throughout her career, Captain Scott has maintained high ethical and work standards. Her performance both on and off duty is reflective of her strong sense of devotion and dedication to public safety. 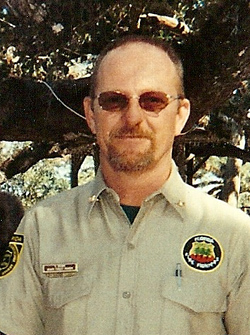 Sidney Brown has been employed since January 1982 and a Senior Forest Ranger since September 1991. Brown has been Strike Team/Task Force Leader for the South Florida Task Force since its inception. Last year, during hurricane assignments, he was an invaluable asset in managing several of the Staging Areas (Lakeland, Arcadia, and Mississippi. He has filled the role as Division Supervisor on several Southern Compact incidents including Operations Trainee at the recent Louisiana detail. He is essential in training new Forest Rangers in fire behavior, equipment operations and maintenance, fireline safety. His work ethics are exemplary. He is one of the few SEAT Managers in the State of Florida. Sidney has been the lead motivational instrument for forest management operations at the Ocaloacoochee Slough State Forest. He is highly respected by local emergency management, fire departments, law enforcement entities to include Hendry County Sheriff’s Department, Florida Fish and Wildlife Commission, and the local landowners, but mostly by his co-workers that depend upon Sidney’s willingness to impart his knowledge, experience, and training.

Sidney Brown is an exemplary wildland firefighter with dedication to professionalism and community service and the State of Florida should be proud to have him as an employee. 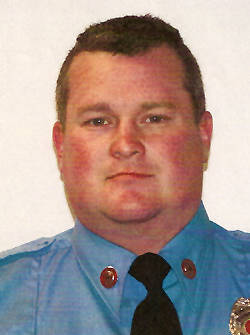 On Sunday, September 24, 2006, Firefighter was at home in the Covington Park subdivision in Apollo Beach. Late that afternoon, Tanker 8 was one of the five units dispatched to a reported structure fire at a location south of Big Bend Rd, between 175 & US 41. FF DeStories noticed on his pager that the incident address was on his street, 13 houses down. He was in civilian clothes but he put on a HCFR shirt and ran down the street. The three children from the house were in the front yard, the front door was open, and heavy dark gray smoke was visible from the doorway. The children told FF DeStories that a babysitter was still in the house. He entered through the front door and heard a banging noise. Smoke was from the ceiling down to about waist high. Chad stayed low and followed the banging to the kitchen and found the babysitter pounding on a locked pantry door, trying to open it to get to a fire extinguisher. The oven was on fire with flames going up the wall, cabinets and to the ceiling. Chad told her that they needed to get out of the house right away. He guided her back through the smoky house and out the front door to the yard. Another resident, a Fire medic Julie Haase, from Station 28, came from her house and checked over the kids and babysitter. Engine 3 arrived and Chad gave the Captain a quick size up of the scene. Chad used the wrench from Engine 3 to turn the gas to the house off at the street. E3′ s crew extinguished the fire with an interior attack.