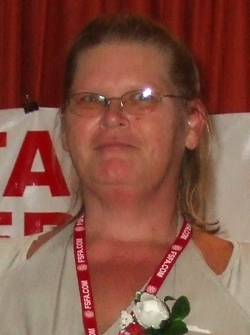 Cora has been a dispatcher with the City of Margate Police and Fire Department since January 1983. In 1987 she took on the extra responsibilities when she became a Training Officer for Communications. Over the past 20 years Cora has trained between 125 to 150 people who have become dispatchers for the department. In 1990 she applied for and became a Lead-Aide. In June of 1993 Cora was promoted to a Supervisor.

During the past year Cora was involved in two incidents that deserve special recognition. In June of 2008, she received a 911 call from a man that said he had a gun and was going to kill himself or anyone that came near him. She immediately contacted the on-duty police supervisor and then directed officers to the scene. Cora and her team of dispatchers were able to contact the neighbors and had them leave the area without incident. The man was later taken into custody without incident. Cora played an important part in the success of this incident.

In August of 2008 she received a 911 call from a man saying he had a knife and wanted to kill himself. The man was on a cell phone that was untraceable. The man would not tell her his location. Through the use of her communication skills, Cora got the man to calm down and built a rapport with him. A short time later he gave her his location. The police responded and successfully Baker Acted the man. He told police if it was not for Cora, he would have committed suicide.

The job of dispatching is a very demanding and requires patience, preservation, being a team player, a need to help others, a great communicator and a commitment to excellence. Cora demonstrated those qualities on a daily basis. 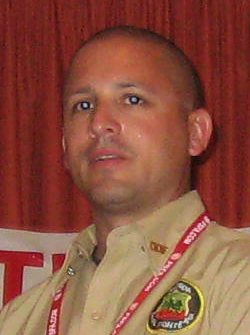 Thomas has been working as a Forestry firefighter for over nine years and served as a Assistant Fire safety Inspector prior to that. He holds a Bachelor of Science degree in Criminal Justice and is a fully trained EMT. He serves as the Fire Prevention Committee chair and Fitness Technician for the district. He currently is working toward qualifications as a Safety Officer.

Thom has worked on numerous incidents in both Florida and throughout the United States. He has served as Incident Commander on hundreds of fires in this area. His immense knowledge of suppression tactics has earned the respect of fellow firefighters.

He has been a leader in fire prevention efforts for over seven years. he provided leadership in the development of the “What Was I Thinking” fire prevention campaign. This campaign targeted outdoor recreational activities to educate and to effectively reduce the number of human caused fires associated with recreational users.

Thom initiated the Smokey Backpack program in elementary schools in this area. Additional teachers have requested to be added to the program because he was able to design it to be incorporated into the class curriculum and be included in the FCAT requirements.

Thom has also assisted in teaching at the Florida Center for Wildfire & Forest Resources Management Training Center. He has been a key cadre member of the First Responder instructors and Structure Training program personnel. He is a member of the statewide DOF EMT strike team as well as being a key expert at training new Foirest rangers in his home district. 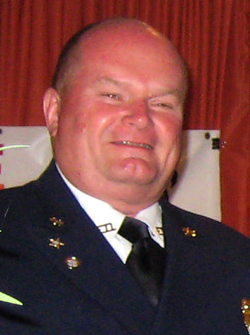 Steve carries a long list of credentials with his nomination for the Firefighter of the Year.

Among those are: his 23 years as a firefighter, with 800 certified hours. Steve spent 5 years as Assistant Fire Chief of West Sebring Fire Rescue, as well as President of the West Sebring Board of Directors. He was Captain of the West Sebring Firematics team when they took home their first state Championship, in 2004. He has been a member of the Florida State Firefighters’ Association for 17 years and has served as a Director, Secretary/Treasurer, Vice-President and President of that Association. He has been a member of the Florida Joint Council of Fire and Emergency Services for the last 6 years and served as Chairman for the past 2 years. Steve has served the past 2 years on the Florida Attorney General’s Personal Advisor Committee, representing the Florida State Firefighters’ Association. He has also spent time in Tallahassee, spreading the word about the importance of legislation affecting the safety of firefighters. He is a member of the Congressional Fire Service and attended the Congressional Dinner, in Washington DC, in 2008. Steve also worked with the Florida State Fire College to bring the Great Florida Fire School to Highlands County, for 5 years. He assisted in the the restoration of the Firefighters’ Memorial at the Fire College, in Ocala. He was instrumental in bringing the Fire Science Degree Program to South Florida Community College. Steve spent much time in organizing the yearly booths for the Association at Fire rescue east and the FSFA Annual Conferences. he was also instrumental in organizing the Fire department Grant Program sponsored by the Florida State Firefighters’ Association. Also, as a member of the Florida Fire Chief’s Association Steve can be seen at many of their events.