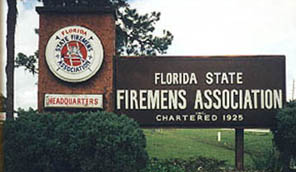 The Florida State Firemen’s Association is a nonprofit Fraternal Firemanic Association, incorporated under the laws of Florida, with membership comprised of fire service personnel in the State of Florida, including retired and associate members.

The Purpose of this Association

The primary purpose of the Association is to raise the prestige of the fire service in the public eye, to provide the firefighters of Florida with a strong and unified weapon to assist them in their efforts to better themselves and the general public in the matter of firefighting, education, life safety, and fire prevention.

Other objectives that the Association pledges itself to strive for are: to establish harmony of action, to promote the best interests of the firefighters of Florida, to cultivate a fraternal fellowship between the firefighters of the State, to promote cooperation and coordination between the fire departments and other branches of municipal, county, state, and federal agencies involved in the suppression and prevention of fire, and to sponsor and further such legislation as will tend to raise the standards of all fire services.

These officers are elected at the annual conference usually held during the months of May or June.

Each District Vice President is responsible for arranging district meetings within his district. Such meetings enable a great number of members to attend and participate in Association meetings near their communities. The Association recognizes the fact that only a limited number of firefighters can leave a city at one time, and by holding a number of meetings within a district during the year, all who desire have the opportunity to attend at least one or two. These meetings are informal, and from them is born the real program of the Association.

The daily business of this Association is performed by the office staff in Avon Park. The operations of the Regular and Senior Death Benefit Funds are also handled by the Avon Park office. The monthly magazine is mailed from the office.

It is the desire and intention of this Association’s officers and the membership to work closely with all organizations in an effort to elevate the firefighting profession, promote better working conditions, and obtain additional benefits so deserved by firefighters.

Florida Fireman magazine is the official organ of this Association. Each member receives the magazine with his membership.

Florida Fireman solicits any news items, pictures and stories of interest from our members, their departments and auxiliaries. Such items and pictures must reach the editor by the first day of each month, in order to appear in the following issue.

Your magazine strives to bring its readers educational and technical articles. as well as to publish the activities of firefighters and fire departments over the State, and to keep our members informed as to what their Association is doing.

This Association has been actively involved in accomplishing the following:

The following are some of the goals set forth by this Association.