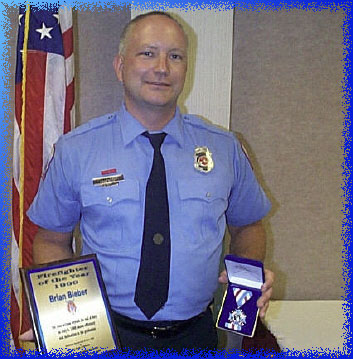 Brian Bieber has been with the City of Bradenton Fire Department for almost 12 years working his way up through the ranks to aerial operator.

On July 6, 1998 at 5:15AM while driving on a major state road Brian came upon a multiple vehicle accident in which one vehicle was on fire. Brian and a number of passers-by stopped to render any help they could and found one person trapped within one of the vehicles. After a number of harrowing minutes, Brian aided by two other civilians, pulled the trapped victim from the vehicle and dragged him 15 feet from the vehicle moments prior to the vehicle suffering an explosion and becoming engulfed in flames. By that time, that particular district fire department had responded along with EMTs. After debriefing with that fire department’s chief, medical crews and sheriff’s department, Brian was cleared to leave the scene.

Brian has shown in the true spirit of community service, selflessness, espirt de corps, and a willingness to help his fellow man, regardless of any danger. Whether it has been during a training burn incident or a community service his efforts have given him the right to feel a sense of well being, and without seeking any pats on the back, the City of Bradenton Fire Department
is proud of Brian Bieber, and his ability to look ahead for the safety and concern of his fellow man. Brian does, in fact, show he is his brother’s keeper and it is for these reasons, we recommend him to be nominated and possible receive recognition as “Firefighter of the Year. 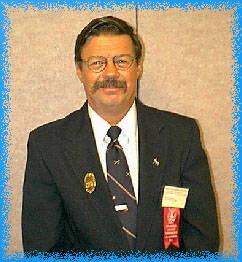 On March 24, 1999, alarm 99-005223 was received for a reported structure fire at 3921 Crystal Lake Drive. The alarm was received at 0025 hours for a 4-story apartment building and several Engines including Engine 34 responded. Broward County Sheriff’s Office Deputy arrived first and reported to fire communications that an apartment on the 3rd floor was “totally engulfed,” wit possible extension to the 4th floor.

Upon arrival of the first due company (E51) the Lieutenant on E-51 advised he had a working fire on the 3rd floor with possible extension to the 4th floor. E-51’s crew started an exterior standpipe operation to get water up to the 3rd floor, second due (E-21) arrived and laid a 5″ supply line to E-51 and then assisted with the standpipe operation. Battalion 20 arrived and assumed command and immediately struck a second alarm. When companies on the 3rd floor gained access to the fire apartment, they encountered heavy fire and smoke conditions.

While one crew was extinguishing the fire, David Kwiecien and another firefighter broke off to do a search. During the search, under extreme heat and smoke conditions, Dave located an unconscious female victim in the back bedroom. With assistance from another firefighter, Dave pulled the victim from the burning apartment and took her down 3 flights of stairs and turned the victim over the waiting paramedics. The victim was transported to the hospital and survived. Her husband unfortunately was not as lucky and perishes in the fire. Crews were deployed to the second, third and fourth floor to search for additional victims/occupants. A total of 12 additional occupants were escorted out of the building without injury.

Dave has been a driver engineer for 20 years but this night he was taken off the engine and sent in to this apartment house fire, sent in to search through pitch-black smoke for people to rescue. “I was very frightened, but I did my job the way I was trained to do. I was surprised normally people don’t make it out of fires like this,” this was Dave’s response to news personnel.

The reason I am nominating Dave has always put his fellow men before himself and has always followed the Fireman’s Prayer. This call really demonstrates how Dave does follow the prayer, specially this excerpt from the prayer where it states “God wherever flames may rage, give me strength to save some life, whatever be its age. “

We are very proud of David as he has always been the first to help out in any situation. For the past 20 years he has always put others before him and has risked his life several times on various fire and medical calls to save his fellow man. Thank you in advance for your consideration of our nomination for the 1999 Firefighter of the Year Award. 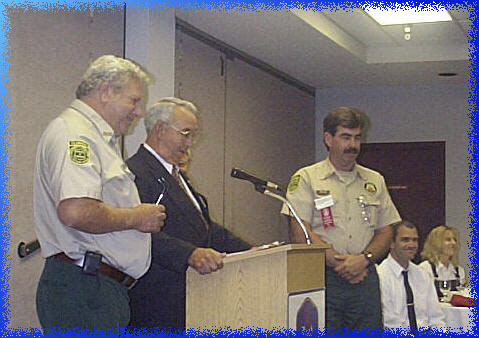 Forest Ranger Frank K. House – has served the State of Florida as a Forest Ranger with the Division of Forestry since April 11, 1980. Frank completed his initial wildland firefighter training contract with the State in August 1981 and has since continued his training by participating in a wide variety of training programs. With his extensive training and invaluable experience, Frank’s firefighting skills are among the best in the State.

Ranger House is being nominated as Florida Forestry Association’s Forest Ranger of the Year because of his response and actions on numerous major wildfires in Charlotte and Sarasota Counties. Charlotte County’s Tuckers Grade fire totaled 700 acres and Frank was among the first responders. His professional skills directly saved 25 homes at this fire. On the Colinswood
fire of 150 acres, his expertise helped save three homes and one church. He was a first responder on the Jacobs fire of 950 acres and helped save 25 homes. On Sarasota County’s Salford fire, Frank helped save another 25 homes.

Ranger House takes great pride in his accomplishments and methodically applies his extensive suppression skills even when activity is hectic and values at risk are great. One acquired skill, tempered by genuine concern, which helps to set Frank apart is his ability and commitment to keep track of fellow firefighters, both Forestry and Fire Department, to see that they are safe. Frank’s concern for other’s safety is just one example of his devotion to the highest values of human life. Additionally, he maintains his apparatus in superb fire-ready condition at all times and can be counted on to give more than 100%. Many times Frank reported for duty on his day off to help during heavy fire activity.

Frank also serves as the Division of Forestry’s Mayakka River District Fire Prevention Coordinator. He leads one of the most active prevention programs within the Division.

Engine Company #23 responded to a structure fire on the morning of December 14, 1998. Upon arrival, he found a wood frame residence heavily involved in flames, covering the front portion of the house, with persons inside the structure. Firefighter Kaden broke the window and climbed in the house and began handing out one adult and several children to the other rescue personnel. After the fire had been extinguished and firefighter Kaden had exited the building and removed his SCBA and protective clothing, he looked back into the room and saw what appeared to be a doll, but was in fact another child on the bed. He jumped back into the house and brought the child out. Unfortunately, the mother and her three children succumbed to the smoke and burns.

Firefighter Kaden has been with with department for little more than one year. This incident would have been devastating to a seasoned veteran, however, he acted as a true professional, putting aside personal danger and making every possible effort to rescue the family. Firefighter Kaden is truly a hero, and the citizens of Hillsborough County and the members of this department are fortunate to have him as part of the team.