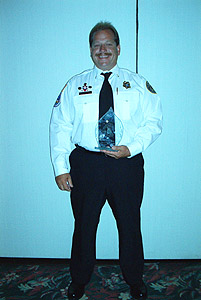 The 2004 career Firefighter Of The Year is Craig Rogers. Craig is a Lieutenant with Palm Harbor Harbor Fire Rescue. He has worked for the department for 16 years

Craig was nominated for the firefighter of the year for his dedication to the fire department, fire service profession, his crew and the community he serves. While in high school Craig began his public service career as a volunteer dispatcher for Tarpon Springs ambulance, life guarding for 3 years and was a ambulance EMT for 2 years. He was a volunteer for PHFR for two years prior to being hired in 1987. He obtained Florida State Certifications; including Driver Engineer, Fire Service Instructor, Fire Officer I, Fire Inspector, and CPR Instructor. He owns and operates his CPR business since 1990. His fire service dedication is not limited to PHFR, as he fought Volushia County wildland fires , in 1998 and went to NY, in September 2001, to participate in funerals of fallen firefighters at ground zero. He was promoted to lieutenant in 2000.

Several months ago, Lieutenant Rogers found and removed a trapped person in a burning structure. While off-duty, he performed the Heimlich-maneuver on a patient, in a restaurant. He received Palm Harbor Firefighter of the Year by his peers and was honored by VFW Post 1658. Nominated by Pinellas County Council of Firefighters, he received Commissioner John M. Morroni Emergency Service Award.

Dispatcher Of The Year – Karen Lovett 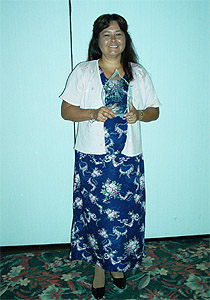 The first winner of the new award,” Dispatcher of the Year, is Karen Lovett. Karen works for the Division of Forestry. She has a strong background in computer skills, as well as a forestry background. Besides her dispatching and fire control duties, she is responsible for Field Purchase Orders, department Purchase Orders, Voyager invoices, encumbering the Operations and Recreation budgets. She assists Administrative Assistant Loraine McKenzie with regret letters to applicants and the training of new duty officers, in the Communications Office. She is let in charge of the Communications Office when the DOS is away.

Karen is always willing to assist her co-workers, the public, and personnel, at Withlacoochee. She is liked by all who know her, due to her friendliness and caring attitude. When she is given tasks they are completed in a timely manner and need no corrections. She does not complain about her work load, is willing to change her shift with other duty officers, or cover for her fellow duty officers when they have emergencies and can not work their assigned shifts. She is knowledgeable of her job and is more than willing to share that knowledge with other duty officers, so the communications office runs smoothly.

Karen was nominated because she embodies the qualities of trust, honesty, loyalty and commitment to the Division of Forestry. She is an employee who puts the good of the Division above her personal feelings, is always available and willing to learn new procedures, teach others, and be a team player. 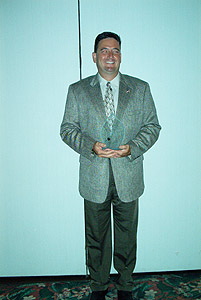 The Forestry Firefighter of the Year is . Frank has distinguished himself in his approach to his duties and responsibilities as a firefighter, for the Division of Forestry. Frank Personifies the phrase “commitment to excellence”, as shown in his professional image, and team work.

Frank is well respected throughout the Division and the community as a firefighter, and representative of the Division. For which he received the Highlands County Home town Hero award. He is also instrumental in the planning and execution of fire mitigation projects in the Okeechobbee District, for which he earned a Davis Productivity Award. Over the last several years he has served as an outstanding asset in the training of new Forest Rangers in the state, by participating in BFCT, setting an example in safety, professionalism, and customer service.

Frank also serves as the District Safety Officer; has had multiple assignments with the Division Incident Management Teams as a safety Officer; and Division Supervisor, and other positions: serves as assistant strike team leader for Region 4 fire strike team. His commitment to excellence is exemplified in his attention to the readiness of his assigned type 6 engine, foe which he has received Okeechobee District awards (and was instrumental in helping the District receive past equipment maintenance awards). He is well respected by the local volunteer fire organizations as an outstanding firefighter, and has worked diligently with them to teach the various aspects and nuances of wildland firefighting.

Volunteer Firefighter Of The Year 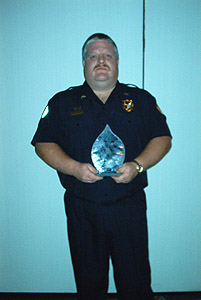 The 2004 Volunteer Firefighter of the Year award goes to Micheal Copenhaver, Chief of Lake Jackson Fire Rescue. He was nominated by the entire Lake Jackson Department. He started with the department in 1996, and worked his way up to Chief, holding many positions and ranks during that time. When not working his job as a Subway Shop Manager, he spend his time training, recruiting and fund raising. He also is almost always on the top or near the top responding members to calls. He almost solely maintains the fleet of 6 apparatus and is responsible for the biggest fundraiser in the history of the department. The 2004 annual “mail out” has generated $13,000, thanks to his solicitation latter the he and the department president wrote, in April.

Recently Mike drove up on a vehicle accident, in the City of Tallahassee, only going out to do an errand in his department vehicle with his stepson at side, he drove up on the accident and stopped to help since only the police department was on the scene. Assuming the driver was unconscious from intoxication, the police were standing by for the ambulance in no major panic. Mike quickly realized that in fact, the patient was in full cardiac arrest, with no pulse. He removed the patient from the vehicle and started CPR. Having an AED in his vehicle and quick assessment. Mike is credited with saving the patient’s life as he had a pulse and shallow respirations before the ambulance arrived. The patient was released from the hospital 5 days later.