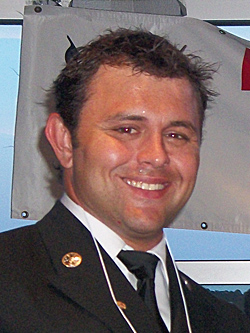 While FF McQueen has been employed with the City of Gainesville his coworkers have found him to be pleasant, hardworking and a real contributor to the success of the organization . He consistently performs his assignments as a Fire Fighter at an exemplary level. He is a high producing employee with a genuine passion for his job. FF McQueen performs a variety of functions for the department, He is a member of the GFR Hazardous Material team as well as other technical rescue specialties. FF McQueen’s most important contribution happened on September 26, 2009.

It was then that at 01:45 am. that GFR crews were dispatched to a residential fire. Upon arriving, they reported flames showing through the roof and windows and initiated operations. During an interior search, FF McQueen located an unconscious patient, Ms. Annette Roberts. FF McQueen quickly assessed the risk to Ms. Roberts, who had already suffered injuries and exposure to smoke, and immediately affected her rescue from the home and delivered her safely to the rescue unit outside. FF McQueen was awarded the Medal for Life saving from Gainesville Fire Rescue and the Liberty Mutual Fire mark Award for his heroic deed.

FF McQueen performs a broad range of assignments with efficiency and accuracy. He consistently displays high standards of professional behaviorand is committed to excellence. FF McQueen’s activities have had a positive impact on our community, the City of Gainesville, and the State of Florida.

Chris Farley has been with the Florida Division of Forestry for 8 years, 4 of those as a Senior Forest Ranger.

Chris has natural leadership skills, and an instinctive understanding of fire and fire behavior. His enthusiasm for the job, and commitment to fire prevention, fire suppression, and the Division of Forestry make him a role model for all the forest rangers in the district.

Chris has been the initial attack incident commander on many fires in the Pasco Forest Area, and has been Division Supervisor and Operations Chief on several of the larger ones.

He is also has a key role in the prescribed burning program as Ground Task Force Leader on aerial burns and as burn manager on ground burns. This year he has been involved with 2000 acres of Mitigation burning and over 25,000 acres of State Land Burning.

Chris is also known as “Blayder the Fire Prevention Clown”, He has appeared in countless parades, events, and school programs, and has been a big hit at the State Fair each year.

hris was also instrumental in the design and construction of the IMT GIS Trailer from scratch.