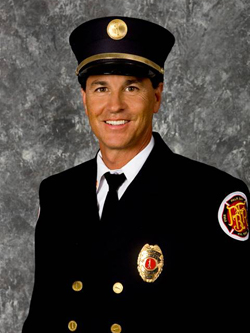 Lieutenant Jim Hamor began his career with Palm Bay Fire-Rescue in February of 1988. He rose to the rank of Driver Engineer in December of 1996 and to rank of Lieutenant in September of 2007.

Jim serves on the Technical Rescue Team, holds various certifications, and is always available to precept our up-and-coming paramedics. He has consistently received superior ratings on his evaluations his entire career, and his personnel jacket contains many, many letters of commendation by citizens, supervisors, and city officials. Lieutenant Hamor is a family man. He loves water activities such as surfing, fishing, but the highlight of his life are his wife and boys.

Lieutenant Hamor is the type of employee every supervisor dreams of, and it was of no surprise when we learned of his heroics on Sunday, July 22, 2012. Lieutenant Hamor just getting off-duty and driving home from his shift noticed an SUV driving erratically, headed into one of the busiest pedestrian and automobile traveled intersections in the City of Palm Bay, with the driver unconscious and slumped over the wheel.

He made repeated attempts to get the driver’s attention but to no avail. Lieutenant Hamor, without regard to his safety or to his personal vehicle, placed himself in front of the SUV to slow/stop the vehicle’s motion. Had he not, there probably would have been a major crash incident due to the amount of traffic that travels through this particular intersection.

Once the SUV came to a safe stop behind his personally owned vehicle, Lieutenant Hamor went into action as his Fire rescue training has taught him. He made the scene safe and called 911 and while waiting for the responding Engine and Ambulance to arrive, began CPH and other life-saving interventions.

Lieutenant Hamor is truly a humble hero, and prefers to be out of the limelight. This can be evidenced by his statement to the media that he “did what any other person would have done”. His actions are worthy of attention as there is no way we could ever know how many lives may have been saved by his selfless and decisive actions. 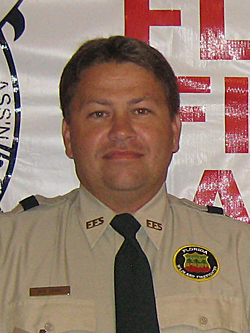 On April 4th 2012 a wildfire was discovered in NE Lake County threatening a number of homes in a known wildland urban interface neighborhood. Lake County Fire Rescue (LCFR) units received the call and were responding. SFR Roy Cribb was actively mopping up a different wildfire nearby. When the Florida Forest Service (FFS) received the call from LCFR that structures were in danger and needed our assistance Roy was dispatched.

Roy arrived on scene and began scouting the fire, and subsequently unified with the fire department near their ICP, to assist with structure protection as emergency evacuations were in progress. While assessing the threat to nearby structures he discovered a homeowner trapped by the fire and unable to evacuate unaided. After a significant wind shift the head fire was moving directly toward the victim’s home, at a rapid rate. Roy notified LCFR that he needed their assistance and then assisted the homeowner into his engine and drove to safety. Also, during this time two Lake County fire fighters became trapped near a structure. Roy, and another unit, again fought their way into the fire to locate the trapped firefighters. At the same time the firefighters were in the process of identifying a secure spot to deploy their fire shelters. Roy came to their aid, loaded them into his engine and brought them out to the command post for rehab. Their fire shelters were not deployed. About this time the tractor/plow units were arriving on scene. One was shuttled to the scene by a non certified ranger. Roy exited his engine , manned the tractor, and began firefighting. 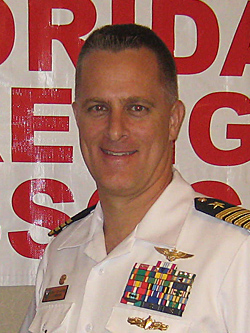 FF ten Hoopen presently serves as a commissioned officer in the United States Navy where he holds the rank of CAPTAIN as Commodore Helicopter Strike Maritime Wing Atlantic Fleet (COMHSMWINGLANT) with his Command headquartered at NSI Mayport FL.
FF ten Hoopen has been actively involved in the Fire and EMS services as a teenager, Naval Academy Midshipmen, naval flight training (received his Gold Naval Aviators Wings), multiple duty stations throughout his naval career, and continuing his involvement during overseas war and peace time deployments.

FF ten Hoopen has been involved in the Fire and EMS services since he was 17 years of age, beginning in his home town of Long Island, NY, starting in 1982 with the West Islap, NY Volunteer Fire Department. In addition, FF ten Hoopen is a Lifetime member of the 8ayshore Ambulance Co. in Long Island, NY. He remained a member with West Islap VFD until his acceptance to the United States Naval Academy in Artnapolis, MD.

As a Midshipman at the Naval Academy, FF ten Hoopen was an active member of the West Annapolis MD Fire Department from 1984 to 1987 during his sophomore, junior and senior years until he graduated and received his commission as an ensign in the U.S. Navy.
FF ten Hoopen continued his dedication to the volunteer fire service and Community with the Jacksonville Fire and Rescue department beginning in 1997 through 2000 with JFRD F.S. # 29.

FF ten Hoopen was transferred to Memphis, TN where he actively served with the Shelby County Sheriff’s Office Search and Rescue Team (SAR) and EMS units from 2000 through 2002.

FF ten Hoopen while assigned to the U.S. Naval War College, Jamestown, RI was an active member of the Jamestown Ambulance Co from 2002 through 2004.

FF ten Hoopen returned to Jacksonville, FL where he continued his service to Country and Community with the Jacksonville Fire and Rescue Department as volunteer at F.S. # 55 from 2004 through 2006, when he was reassigned to the Pentagon in Washington D.C.
FF ten Hoopen was and still is actively volunteering with the Fairfax County VA Fire and Rescue Department, F.S. # 5 from 2007 through 2009.

FF ten Hoopen was transferred to NS/Mayport as Commodore Helicopter Strike Maritime Wing Atlantic Fleet (COMHSMWINGLANT). During his duty station FF ten Hoopen continued to actively volunteer and was selected as president of the JFRD Volunteer Firefighters Association from 2009 through August 2012.

FF ten Hoopen has been a driving force during his term as President of the Firefighters Association. He has been responsible for the Increase in volunteer membership with the JFRD, authored the association’s by- laws, and provided training opportunities, overall morale and fostered the support of the department’s senior leadership and career firefighters.

FF ten Hoopen returns to Fairfax County Fire and Rescue Department, as his next naval assignment takes him back to Washington D.C. in preparation for his last duty assignment as Embassy Military Liaison Officer to the U.S. Ambassador in Spain.

FF ten Hoopen volunteered his time at the station, in administrative capacity, and training. He averaged 2 hours per day for administrative work while responding to an average of 4 runs per tour of duty at fire station 55.